Earlier I wrote about Alon’s trip to Japan, of which the first part can be read here. Shortly after my post he sent me another batch of pictures with a stellar and vibrant report. Today I found some time to put it up, so sit back and enjoy Alon’s trip to Casio HQ! 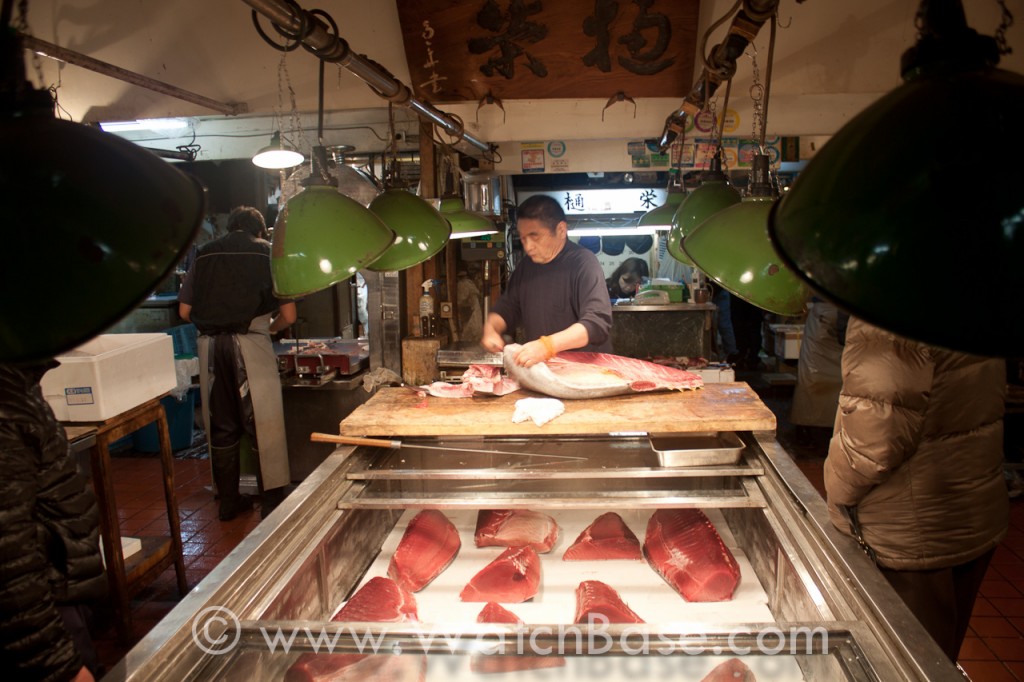 Alon in Japan – the fish market 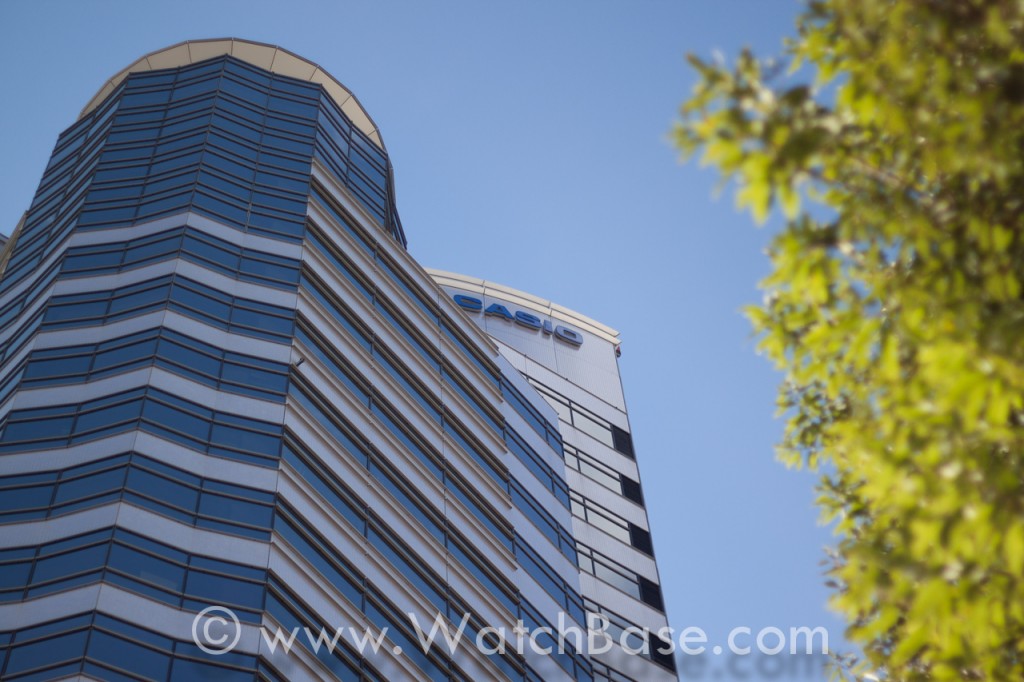 After visiting the Premium Production Line of Casio in Yamagata on Tuesday, we spent Wednesday exploring Tokyo and learning about the Japanese culture. The main focus was to learn why Japanese are so innovation-driven, like was the case for the Kashio Brothers, the founders of Casio Computers Corporation, Ltd. 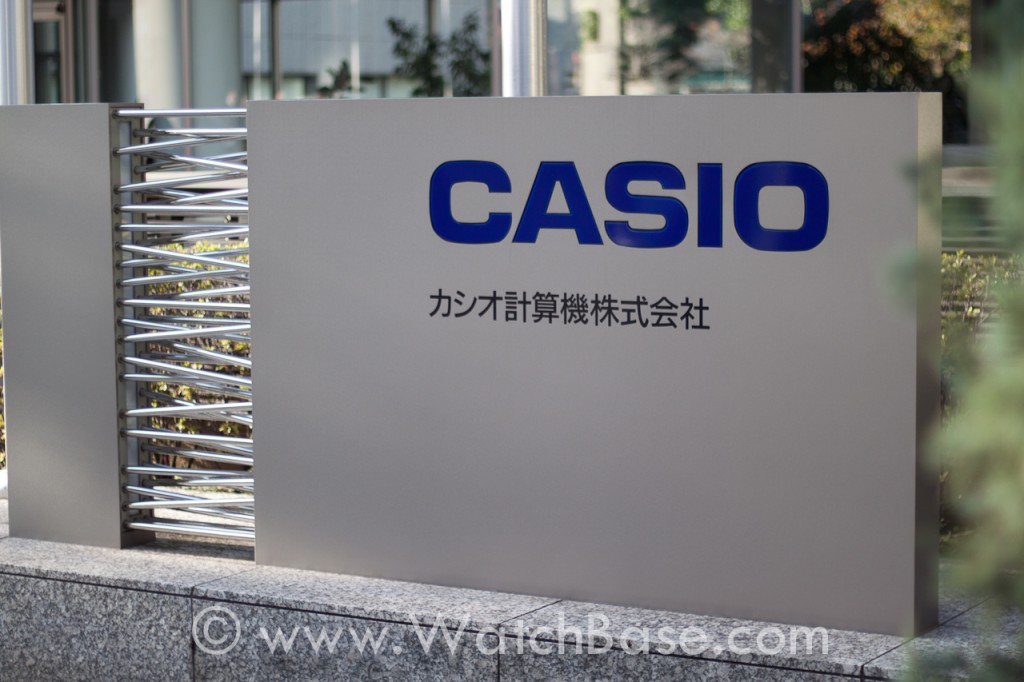 In 1946, Tadao Kashio founded a company called Kashio Seisakujo, in Mitaka, Tokyo. One of his earliest innovations was some kind of ring that held a cigarette, allowing its wearer to smoke the cigarette until its very end – with Japan impoverished from WWII, this innovation was quite a success. Tadao Kashio, now joined by his brothers Toshio, Kazuo and Yukio, would go on and invest the proceeds in the development of electronic calculators, of which the first prototype was shown by in 1954. In 1957 the first commercially available electronic calculator was introduced by the company, at which time Casio Computer Co., Ltd. is established. 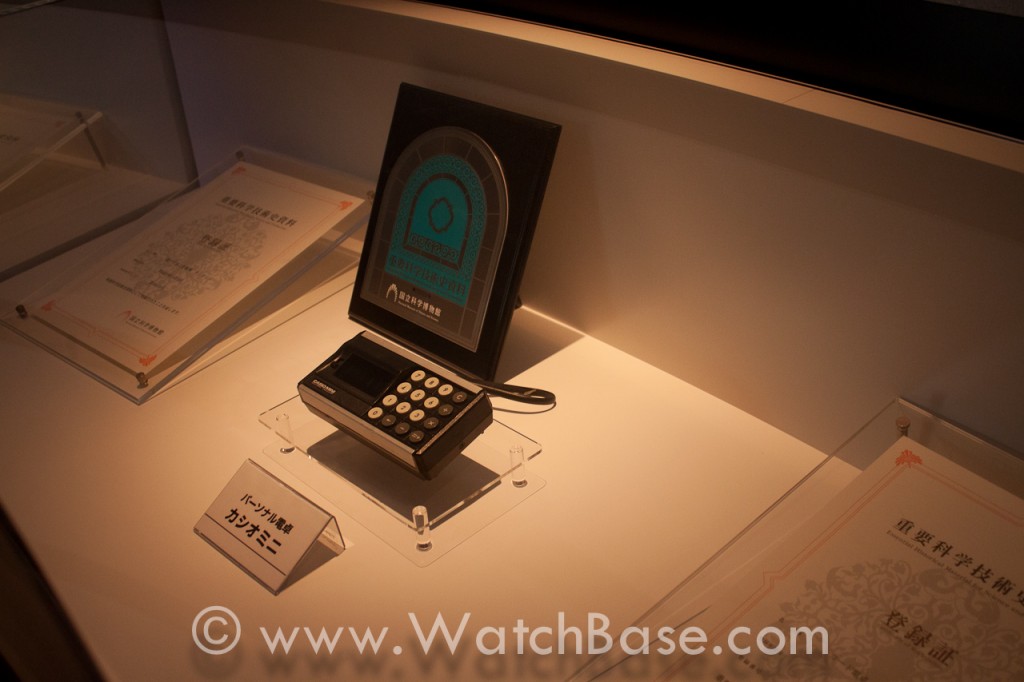 Today the majority of the shares of the publicly listed company Casio are held by the Kashio family and one of the founding brothers presides over the Board, with his son acting as CEO. In 2014 the turn-over of Casio was approximately EUR 2.6 billion, of which the watch division accounts for a bit over 50%. The last five years the watch division has shown double digit growth rate globally and there is no signal they are going to slow down. The growth started in 2007 when the urban scene and street lifestyle revived the retro 1980s design G-Shocks and they vintage models of the pre-G-Shock era of Casio. In 2010 Casio started focusing on analog G-Shocks and that has been received very well. Since last year Casio started focusing on “Made in Japan” Premium quality production and moved up market with the following product lines: 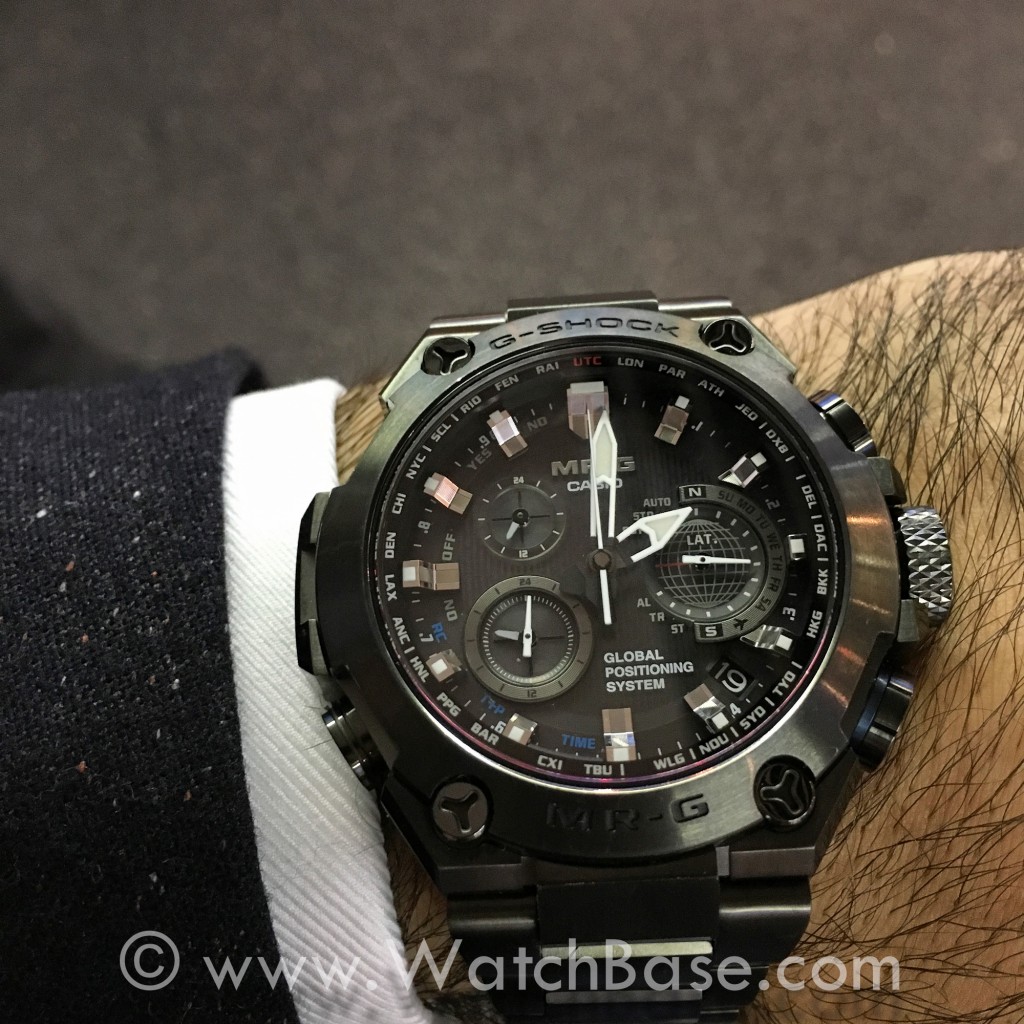 So, the first question that comes to mind is why Casio makes watches of EUR 19, G-Shocks starting at EUR 99 and then moves up to EUR 999?, with the Premium MR-G watches and Oceanus watches even reaching well over EUR 2.000?

We will answer this question by quoting watch expert, Gerard Nijenbrinks, on a wrist shot of the MR-G black DLC titanium watch: “It’s really a pity that many people omit to do research on this type of G-Shock product. The build quality, technical features and innovations in this product absolutely don’t do it justice as referring to it as any G. Of course there are G’s at 1/10th of the price, however there are Mercedes-Benz’s for 30k and for 300k as well…” We could not have given a better answer.

So, rests us to analyze what does quality mean for Casio, what technical features do they offer and what innovations do they present? We can’t exist without history. The history of G-Shock starts with living watch guru: Mr. Kikuo Ibe. In 1983 his brain child, the Casio G-Shock, was introduced. Its importance can hardly be exaggerated: until this point in time, most watches were still rather fragile objects, whereas the G-Shock was designed to withstand a fall from 10 meters, have a 10atm (100m) water resistance and have a 10-year battery life – the so-called Triple 10 Criteria.

The development of the G-Shock was in-line with Casio’s credo: “creativity and contribution.” It expresses the company’s commitment to contributing to society by offering the kind of original, useful products that only Casio can.

Products with innovative functions assist people in their daily lives and keep society moving forward. They also bring joy to people and help to create new culture. When even a single new product is widely adopted, whole new markets develop, and this in turn fosters growth in related industries. This is the story of Casio’s contribution to society-innovative products enhancing people’s lives.

The Charter of Creativity for Casio is a statement of the company’s commitment to the world and an internal guideline designed to ensure that every member of the Casio Group practices Casio’s corporate creed of “creativity and contribution.”

The Casio Code of Conduct is the essential guide for the daily work of all Casio employees.

They summarize this in the slogan: Something from Nothing = 0 > 1. Or, in full: ‘ We will develop and provide products and services beneficial to society based on our creation-oriented mindset to create new value from nothing, or by going from “0” to “1”, and contribute to the development of a sustainable society in the process‘.

This was all explained to us today by Mr. Horishi Nakamura, Senior Executive Managing Officer, Member of The Board, Senior General Manager and Global Marketing Headquarters. Mr. Nakamura welcomed us in both Dutch, German and English, as he lived for almost two decades in Europe. After his presentation of the history, present state and future developments of the company and the watch branch, he introduced us to Mr. T. Morishima, Head of Design of G-shock. 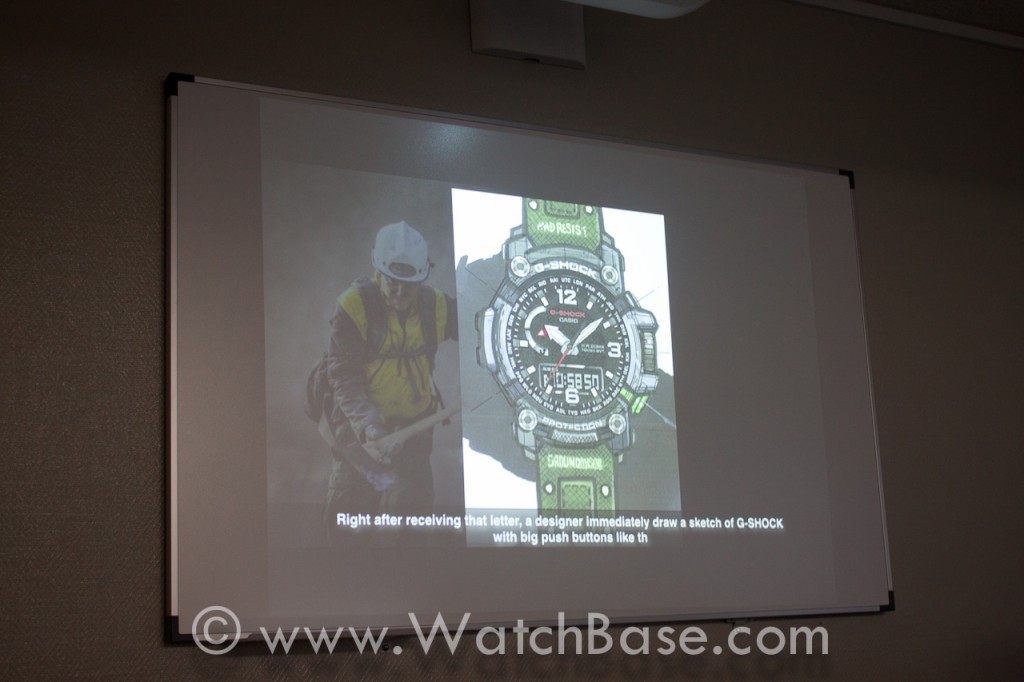 Mr. Morishima explained, which we summurazed to: basically G-Shock always followed the Form-Follows-Function philosophy. It was born out of necessity for though, shock-proof watches. Like Land Rover Defender cars. Not a coincidence that both Dale and me are mad about Defender cars AND G-Shock watches! He explained that Casio educates all in-house designers internally and give them a lot of freedom to grow and experiment. 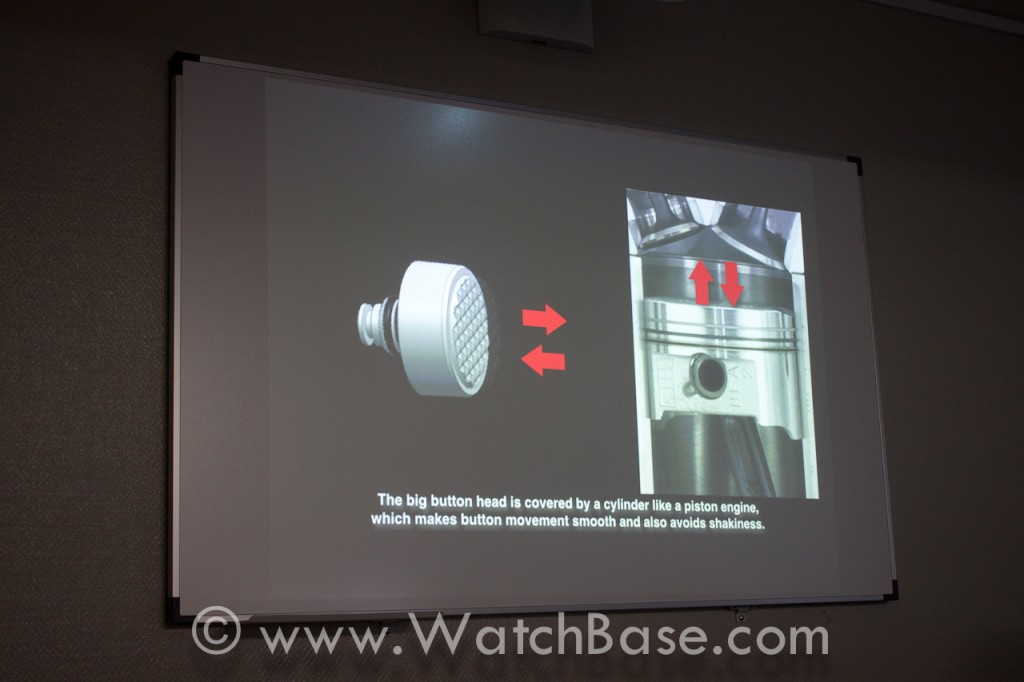 Inspiration is drawn from a wide array of fields – professional equipment, the automotive industry, urban culture and much more. They always draw a rough sketch by hand, then redraw it in a better-quality drawing and finally redraw it digitally in CAD. And, they are non-stop in pursuit to innovate and make watches more robust. He explained how they came to develop the Mudmaster: a fire figher, who is a great G-Shock fan, wrote to Casio he always works with gloves in muddy surroundings in the mountains and he needs bigger pushers. Hence the very charismatic Mudmaster which was launched earlier this year. 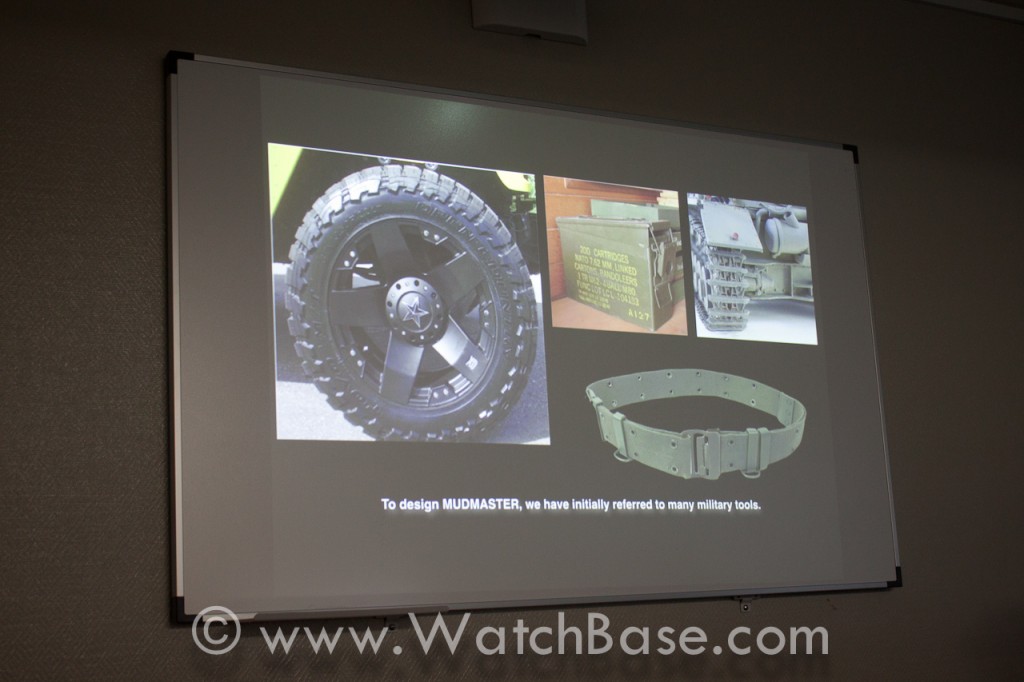 Then there as time for a full length, no restrictions Q&A will all Casio representatives present. The question that is asked often is, why Casio never has created any mechanical watches and if they are planning too. The answer is rather simple in Casio’s corporate strategy: historically they are a technology company and not watchmakers. There is the desire to grow and evolve in the timekeeping sector by innovation and precision (of timekeeping). As such, mechanical watches do not fit this strategy. 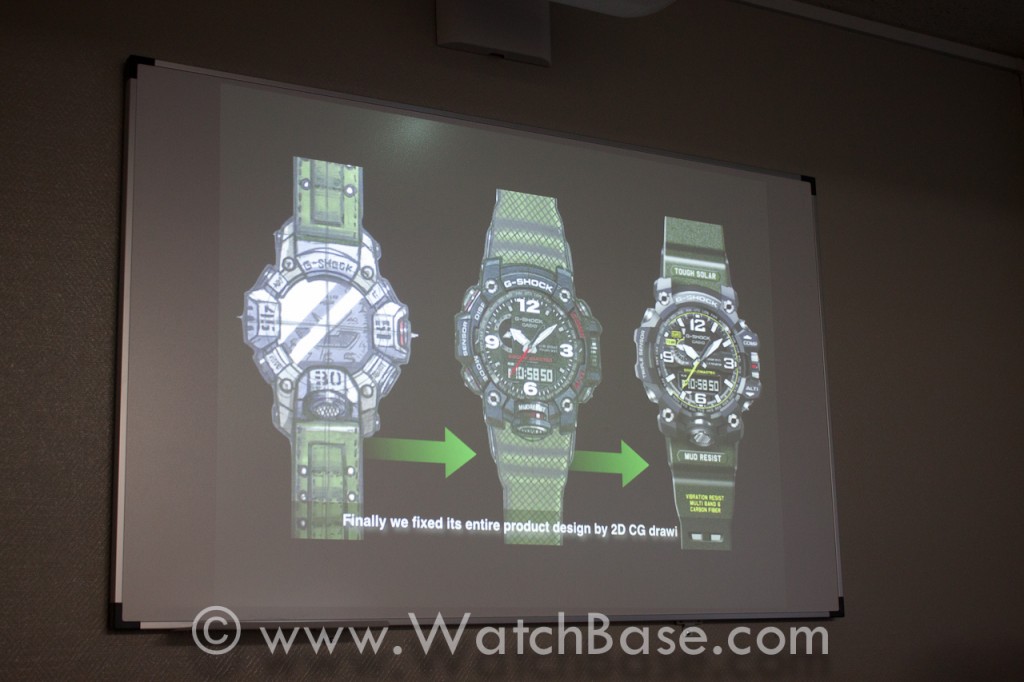 Another question was of all designers and design come from within or do they work with freelancers and do they outsource design. That answer was very short & simple: They don’t. Everything is done in-house! 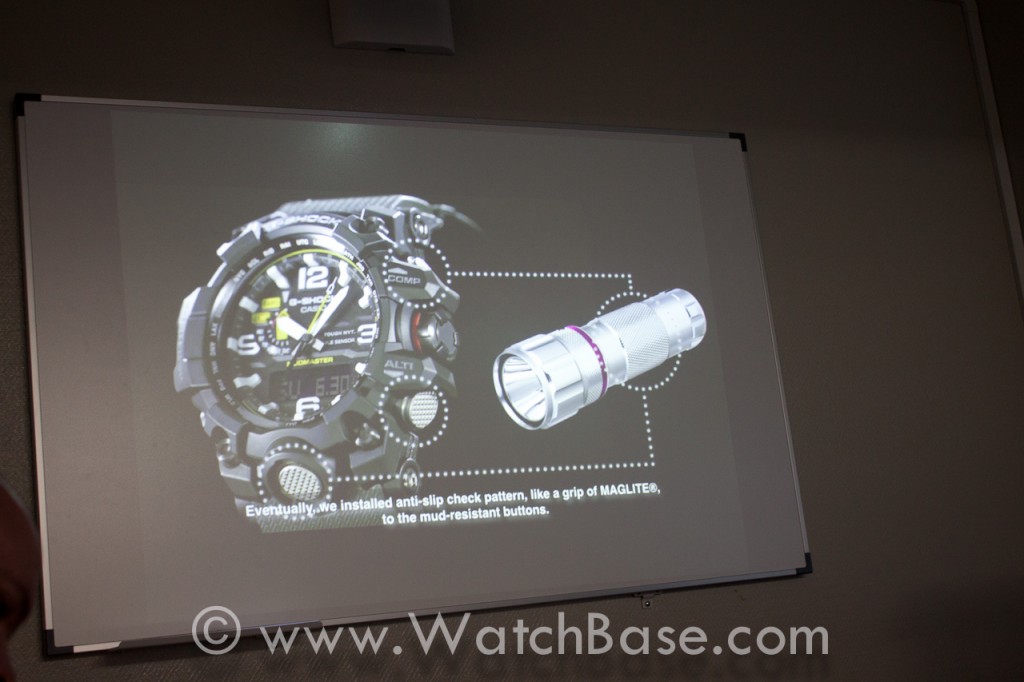 After some brainstorming about education of retailers about the products the visit came to an end and we were all invited to a traditional Japanese restaurant in the neighboring Opera Tower. There we had a surprise guest waiting for us: Mr. Etsuro Nakajima, who retired this very day. Yes, this was his last day at Casio after working there 39 years, where he started at the age of 23. He spent all his working life thus far at Casio, with his last official title being Senior Manager of Module Development Department of Timepiece Devision at Hamura R&D Center. As most Japanese do not retire and sit still, Mr. Nakajima starts tomorrow at his ‘new job’ as Representative Director of The Horlogical Institute of Japan. We had the honor to speak to him for several hours and he is very open, friendly and full of knowledgde of the complete international watch industry. He committed to do an exclusive interview with WatchBase. Stay tuned for the full interview!

Interested in Alon’s other impressions of Japan? Read them on his blog.